When Opera and Guitar Collide, this beautiful thing happens 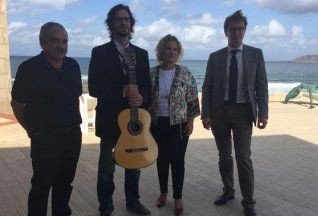 Alfredo Kraus Auditorium hosts the ninth edition of the traditional cycle Masters Guitar, a must for lovers of the six strings to be held on 17, 18 and 19 November appointment. This new installment of the meeting will bring together a selection of artists who will delight the audience: the virtuoso ingeniense Jose Maria Ramirez Martin; Touché eclectic !, the duo from the island of Tenerife; the prestigious Brazilian globetrotter Jurandir Santana Trio; and MEG 2016 Youth Orchestra, formed by a group of young and talented guitarists Canary academies.

Guitar teachers saw the light in 2005 with the aim of bringing to the public the different universes featuring guitar, starting from the most classic face to discover the possibilities offered by the fusion of styles, such as jazz or world music. In this way, the guests, considered masters of different aspects, will take part in this concert promoted by the Foundation Teatro Auditorium and Las Palmas.

Events will be on November 17, 18 and 19 of November in the Alfredo Kraus Auditorium in Gran Canaria. The Auditorium of Las Palmas de Gran Canaria bears the name of Alfredo Kraus, the most international Canary Island tenor and the most beloved by the general public. This is a gesture of tribute and gratitude for his work in the music world, his figure carrying the name of the city to the ends of the earth.

Born in the town of Ingenio, Gran Canaria, he began his musical studies at the Conservatory with teachers Eusebio Barroso and Eligio Quinteiro and completed his studies at the Conservatory of Music of Las Palmas with Professor Carlos Oramas, finished them the "Special Award" Thesis. Motivated by their musical moved to the Netherlands for postgraduate studies at the Royal Conservatory in The Hague, obtaining the title of Master's Degree in Music under the tutelage of concert Zoran Dukic. Then continues its studies of improvement in the Strasbourg Conservatory concert with Pablo Marquez. In his musical training also significantly they influenced other guitarists, especially Miguel Trápaga. At the same time attending various master classes with artists like David Russell, Marco Socías, Carlo Marchione, Pavel Steild, among others. ​